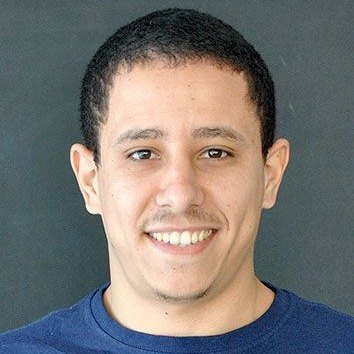 Rafael Pacheco is Master of Mathematical and Computational Modelling and Bachelor of Computer Engineering at CEFET-MG. Works as a developer advocate at BLiP, Take’s chatbot platform. Loves technology and soccer. Likes teach, discuss and talk about things that believe. In the last years, has made efforts to teach everyone everything that knows about bots and BLiP platform.

Some images to be used in marketing materials of any event. There are different images with different size and densities. You are free to choose anyone.

Rafael Avelar Pacheco, brazillian, from Sete Lagoas city borned on 1990 December 08 and currently lives at Belo Horizonte. Is Bachelor of Computer Engineering and Master of Mathematical and Computational Modelling at CEFET-MG. During the university time moved to Porto city, in Portugal, and studied for a time on Faculdade de Ciências at Universidade do Porto.

Before get in university used to spend free time among study, play video games and soccer. Never played soccer as a professional but had played relevant championships in Brazil, like JIMI 2007 and JIF 2010.

Besides a lot of friends, soccer gave skills and great life experiences like: work in a team, control anxiety, never give up and meanly know that some times you will lose.

In 2011 had your first professional experience going to work for an important Brazillian Telecom in order to develop software. After return to Brazil, in 2013, started to work at Take where speciallized in build messaging applications. Together with professional activities made some private and social projects, like:

Nowadays, is developer advocate at BLiP, Take’s chatbots platform. Among other things, helps (direct or indirectly) more than 5000 developers and companies around the world about how to use BLiP to build great conversational applications. From developer intern to technical leader already had different roles. Every weekend keep trying to play soccer and is the forward of Tchê Garotos F.C.

Occasionally, writes about programming, chatbots and random subjects in your personal blog and sites like InfoQ, ChatbotsBrasil and BotsBrasil.

I also have a chatbot (click here if you don’t know what is a chatbot) that knows a little bit about me. I would love if you try to talk with one of them on Messenger, Telegram, Skype or Blip App.

But, if you just want to email me, go ahead send an email to ravpacheco@gmail.com 😉

Probabbly you are quenstion yourself why my blog and a lot of my social networks identifiers is ravpacheco? Simple, this word represents initials of my name Rafael Avelar Pacheco :).